For many sports clubs, the end of the season marks an extended break for players but one of the busiest times for support staff! In a short window of opportunity, there’s often lots to be done. Grounds can be repaired or altered and infrastructure modernised and updated. 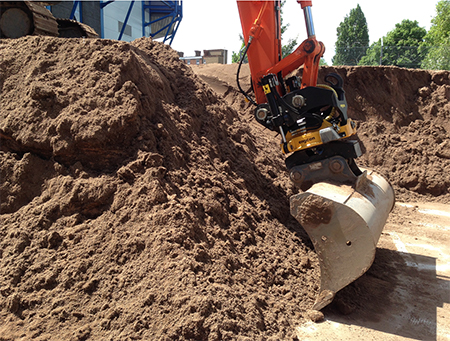 Fortunately for Soils and Stone, we are used to working under pressure to meet tight deadlines. This meant we were the perfect fit for an end of season project involving a Premiership pitch redevelopment at one of the UK’s most famous sporting venues.

Our client’s brief was to complete a large muck away clearance at the initial phase of the pitch redevelopment.

The full programme of works required the team at Soils and Stone to remove nearly one hundred loads of muck away over two days.

Working in conjunction with the club’s groundsmen and specialist sports pitch team contractor, Soils and Stone coordinated the muck away lorry movements to reduce congestion on site and minimise any downtime.

With such a large team working at any one time health and safety of all those on site played a significant part in the plan and so FORS contractors were used for added peace of mind.

“Our in-house team get to experience huge diversity in both the styles and types of projects they work on. Each programme brings its own challenges and its own problem solving but our aim is consistent. We always strive to deliver practical and workable solutions for every client so playing a small part in the redevelopment of one of the UK’s most icon sporting venues was a thrill despite the fact we had no fans to cheer us on!”
Ozzy Cecil, MD of Soils and Stone.